My 5E3 Deluxe "UN"-clone, simple mod for tight bass, more clarity. (As featured on 'The Truth about Vintage Amps with Skip Simmons" 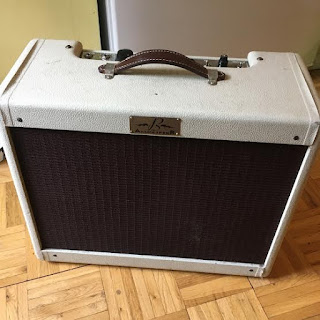 Recently I was interviewed about an amp I built, one that is my main gig amp. Steve Melkisethian of Angela Instruments played it about a decade ago and it left quite an impression apparently. He commented on the low end and how it held together nicely. Isn't your typical "Neil Young dirt box!"
Truth is it's all in the big knobs folks: 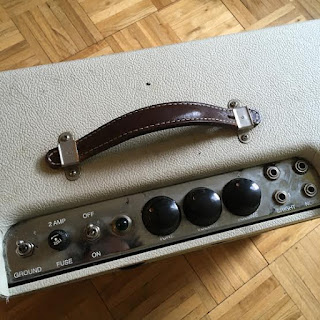 So, obviously that's not true. But there isn't much to it. First, a bit of background. I have no qualms with the stock 5E3. I'm a big fan of Neil Young and his sound and I've always liked the 5E3. I just wanted to build something a tad bit more modern for my own use. I prefer a tighter sound, something that is more clear. Most of my gigs I'm not using a mic. I've had little tube amps literally get swallowed up into the mix. I can't actually use that. I need to hear myself to have a good time.

The first thing I did was what I usually do: 47uf capacitor on the first stage, followed by a 22uf then an 8uf. That 47uf makes a difference in sag and compression. The original is 16uf. I also like that first stage to clean up any unwanted 60 cycle hum right off the bat.

The second thing I did was use a larger cathode bypass capacitor across the 250 ohm 10 watt resistor. You can experiment with values there, I used 100uf @100V. The Vox AC30 uses a 250uf cap there. Deep bass. 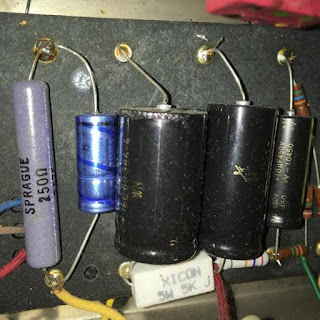 Now these things helped me achieve my goal. But that's not all. The next thing I will freely admit I did not come up with on my own. I mean, same with what I discussed above, these are all things I just learned from others.......
I had a really good client when I owned Leighton Audio in Portland Oregon. He was a bit of a perfectionist. My eyes would roll whenever he came by cause I knew I'd work a little harder. But every time I worked with the guy I learned something new, so I always appreciated not only his business but also his "can we make it better?" attitude.
He brought in a 5e3 clone that he bought somewhere. Nothing special. It had a problem, bad tube or something. So when I got to it I noticed this 3.3Meg resistor that "shouldn't be there." I said in my mind "well, that's wrong" and yanked it on outta there.
He picked up his amp, got home and said "problem is fixed, but this amp had such a great low end and now it's flabby. I knew exactly what was going on, it was that mysterious resistor. So he brought it back in, I replaced it and we were both happy. Him to have his amp the way he liked it and me cause I learned what I wanted to do to my own amps.
So, what exactly is this mod? I can't say I know why it works, I can just say what the result is.
Take a 3.3Meg resistor from the last stage of the power supply and connect it to the grid of the phase inverter, the pin attached to the 1 Meg resistor. That's it. Voltage goes up on that grid and the cathode, amp sounds more clear, has tighter bass and if you like that hooray. If you don't simply remove it.
Photo: 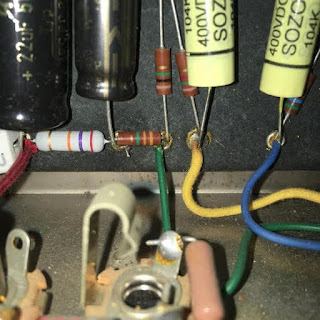 I was asked if I would put it on a switch..... Switches aren't for me personally. I have enough on my mind when I'm on a gig. Volume, tone, guitar. That's as much bandwidth I need on my equipment so I can focus on the music. But if you prefer a switch, go for it and tell me your results.
Other bits about the amp... I used Mogami wire throughout the signal path. I learned this from working with an ace studio technician named Tim Hatfield back in 1992. It's nice to work with and sounds warm and clear. It's finally widely available again. I could find their shielded stuff from many sources but had to go through some channels to get this copper gold back in the day! I've used it for mic pre's, pedals....
Check it here:  https://www.performanceaudio.com/mogami-w2514-hi-fi-red-hook-up-wire-by-the-foot.html
I also used nice Black Cat capacitors in the preamp along with Sozo caps as well. Good old mica cap for the treble.... 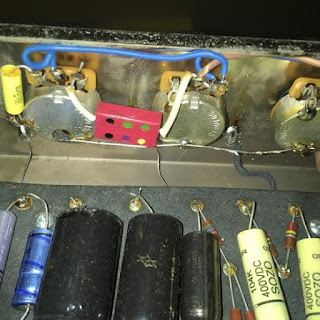 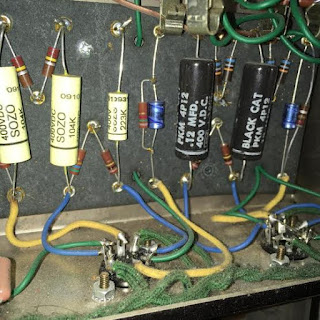 Transformers are Heyboer / Mojotone Deluxe Reverb power transformer (lower voltage, more current, runs cooler!) and just a Mercury ToneClone for the output. I didn't want to go with bigger iron. For me it's a balance between high quality components and average. Black Cat caps aren't the best in other words, but they're then best for this kind of thing in my opinion.
And hey, this mod works on Princeton amps too! I like a Princeton, I've never loved them. They sound harsh and unbalanced to my ears when you push them. Not useful to me. I prefer my Deluxe Reverb for a 'modern' Fender amp.
Recently I had 2 Princeton Reverb amps come across the bench in one day. One was a museum quality 1965 that I was probably the first to turn a screw on. Original tubes, everything. Not a stain or scratch. I left that one alone.
The second was a butchered 1973 model. Someone had done plenty of "wha????" stuff to it. I needed to restore the thing so I figured I'd see if I am crazy thinking this mod is as good as I think it is. 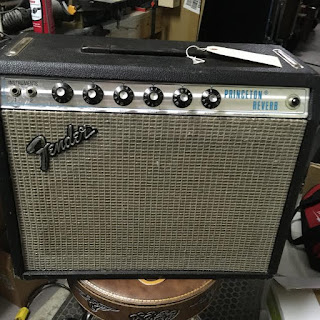 Once I got the bugs sorted I blasted it and got that awful sound I usually get with the Princeton Reverb. Lovely at low volume, just awful to my ears at high volume. For me the 5e3 with it's simple volume and tone arrangement, that works for me. Not to mention the softer warmer cathode bias. With the Princeton's grid bias, scooped mids and more complex tone stack, it just never suited me.
Spot the 3.3Meg resistor: 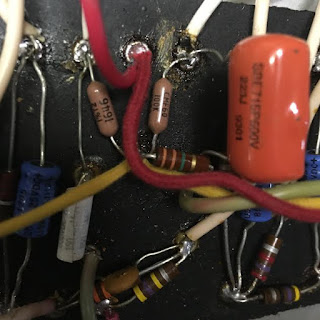 It's right on the .022 cap feeding the phase inverter. The Princeton and 5e3 Deluxe have a very similar phase inverter.
Disclaimer: what you see above is not my work! It's sloppy but functional. This job was for a client who needed to keep the cost low. I would typically gut something like this and do it over!!!!
I've seen all kinds of complicated mods done to Princeton Reverbs. I've seen the tremolo scrapped so someone can re-do the whole phase inverter to be like a Deluxe Reverb. Ugh! The tremolo is the thing I like the most in a Princeton!! Try this one simple mod first if you want more headroom.
That's it today. Hope you got something out of this article. Please feel free to leave questions and comments below!
And here's me yammering on about this stuff on Skips podcast. I think he's doing a great service to those who like to play with capacitors! Thanks Skip!
https://vintageamps.libsyn.com/ep-52-dogs-riding-bicycles
-J

Posted by ghostwriter at 8:41 AM